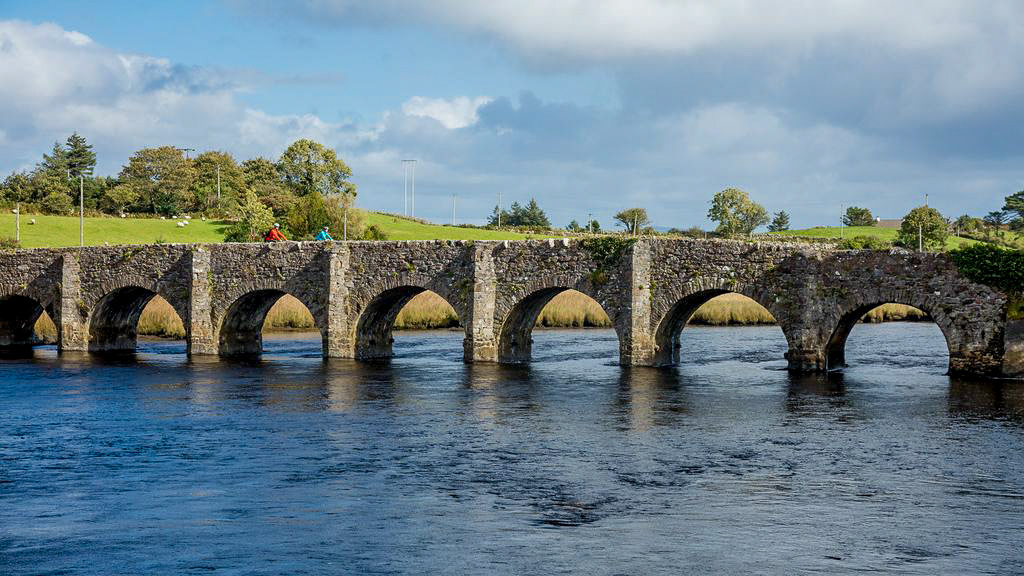 Bridges are an important component of the early nineteenth-century civil engineering heritage. Here is a list of the most notable bridges in Co. Mayo.

In 1841 a road running from  Glenamoy to Carrowteige was approved and eventually completed in 1846, but no bridge was erected over the Muingnabo River. People could ford the river using aa unsafe paving. During the Great Famine and following years, this river ford became the parting point between the emigrants and their families; scenes of lamentation and sadness were witnessed here. Also, in flood times, the river often became a roaring torrent sweeping away people and cattle.

Annie Brady was the wife of the Inspector of Fisheries for the area. She had a great love for the scenery of the district and saw those sad scenes. She decided to raised money to build a bridge at the site to help people to travel further with their loved ones and safer. The bridge was built in 1886 and swept away by a great flood in 1933. It was then replaced by a new structure still there today.

The seven arched Burrishoole Bridge was erected in the 18th century when the road between Newport and Mulranny was built to allow people to cross the Burrishoole Channel.

Its form and materials perfectly blend with the landscape and it is one of the most peculiar bridges in Mayo.

Nowadays less traffic travels over it since the 1950s when the road was re-routed.

The seven arch viaduct over the Black Oak River was erected in the late 1800s. It was built out of local red sandstone with some limestone facings as a part of the Midland & Great Western Railway linking Westport to Achill Island. Nowadays it serves as a footbridge.

The Bellacorrick Bridge was built around 1820 over the Owenmore River and designed by the civil engineer William Bald, who was commissioned to build roads in Erris area.

The Castlebar native engineer Patrick Knight in the service of the Board of Works was an assistant to William Bald and is associated with the construction of the bridge and road.

They had difficulty in building the bridge because of the soundness of the ground and had to secure the foundations by timber.

In early 19th century records, it is described as the largest and best-built bridge in Mayo.

The bridge, also known as 'The Musical Bridge’, has become an object of curiosity.

Music is produced from this bridge in two different ways.

First, by rolling a stone along the parapet on either side and, as the stone drops along, musical notes are produced in rapid succession.

The second method is to hold the stone in your hand and to strike it on the slabs, which form the coping of the parapet hitting each slab as you go along drawing back the hand immediately after striking.

Each slab gives forth its peculiar note, and an incredible musical scale is produced.

In the 17th century, the Erris prophet Rua U'Cearbhain made a prophecy that the Bellacorrick Bridge would never be finished and it has never been.

The Glennacally River is situated on the North West side of Maumtrasna Mountains near Leenane. There was a ford to cross the stream. In pre-1816 the single pointed arch Glenacally Bridge was built to replace the old ford.

The Clapper Bridge is a footbridge spanning over the Bunleemshough River and is located at the Colony, near Louisburgh. It takes its name from the word Clapper which is the plural for the Anglo-Saxon word "cleaca", meaning 'bridging the stepping stones’.

It has an interesting history. It was built in the 1840s when a Protestant Evangelist Colony, including a church and school, was set up beside the river.

The bridge is a low, curving construction, 40 metres long, formed of 38 boulders spanned by slabs of stone, and takes walkers across a wide but shallow ford.

The Clapper Bridge remains a unique and unusual monument, to a shameful period of Irish history. Mayo County Council maintains the bridge in perfect condition.

Approaching Hollymount Village, the simple triple arched Hollymount Bridge comes into sight. It spans over the river Robe and is a typical South Mayo bridge built out of local limestone.

Between 1791 and 1816 Lord Tyrawley built the Deel Castle Estate and Catlegore Bridge was erected as part of the estate spanning over the Deep River near Crossmolina. It has five arches with cutwaters and a gentle rise towards the centre.

The latticework parapet has a handrail and round terminal pillars with ball finials. Embossed on the girders the foundry’s mark “E. Manisty, Dundalk” can be seen.

Palmerstown Bridge is located north-west of Killala between the townlands of Castlereagh and Rathnawooraun spanning over the Cloonaghmore River.

According to lore, it was built around 1788 by the Langan brothers from Donegal.

In 1798 General Humbert and his French Army crossed over the bridge after their landing at Kilcummin.

Palmerstown Bridge is one of the oldest bridges in Mayo and has eleven stone arches.

Clongullaune Bridge is a six-arched bridge built pre 1811. It is located near Swinford and spans over the River Moy. During the War of Independence, it was badly damaged.

Windy Gap Bridge is situated at the Windy Gap near Castlebar. This old barrel arch bridge was built pre 1816.

Bangor Bridge is a four-arched masonry bridge spanning over the Owenmore River in Bangor. It was built between 1816 and 1838.

Deel Bridge is located south-east of Bellacorick. It was built pre-1816 and spans the Deel River.

This three arch bridge is located at Loghtavarry near Castlebar and spans on the Tooemore River. It was built in 1780.

Ballina Lower Bridge was built in 1833-35 by in all probability William West and spans over the River Moy. It cost an estimated £1,200.

It is a four elliptical arched bridge with repointed red brick voussoirs. The red bricks and the rough cut limestone work produce a mild polychromatic palette and make a pleasant sight at the crossing over the River Moy.

Built in 1835-6 by Thomas Ham, Ballina Upper Bridge is a five-arched bridge spanning over the River Moy. It cost £3,000.

The “sweep” of the arches and the "sparrow pecked" surface finish offset by sheer limestone dressings give an elegant structure to the bridge.