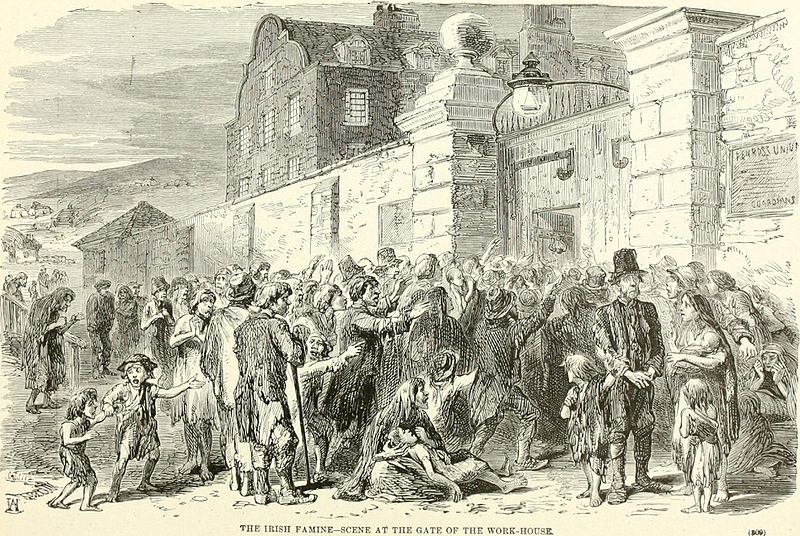 During Ireland's Great Famine 3,000 Irish Quakers contributed their time, money and influence to alleviate the suffering of those around them.

Also known as "The Society of Friends", the Quakers understood the Great Famine had catastrophic effects causing mass starvation and diseases.

In November 1846 the Quaker man Joseph Bewley organised a central relief committee with further corresponding members around the country in aim to relieve and help the poor.

In the early months, the Members used to meet in Dublin in 57 South William Street.

Many Irish Quakers were merchants and businessmen, including Bewley (tea and coffee) and Jacobs (biscuits). They were in close contact with English Quakers who established a relief committee in London to raise funds in the UK and America.

They were able to purchase goods easily and move them efficiently across Ireland.

They set up soup kitchens in many areas throughout Ireland. In Mayo, they ran a soup kitchen in the townland of Currower near Attymass.

The Society of Friends bought 294 copper steam-vats from the Quaker Company Abraham and Alfred Darby in Liverpool. They distributed them to workhouses and Quakers soup kitchens for cooking a soup called ‘stirabout’ made from rice and maize which they imported from America. Also, the Quakers found local people to run the kitchens.

In the spring of 1847 William Bennett, an English Quaker, came to Ireland in aim to encourage people to diversify crops beyond the blighted potatoes.

He and his son purchased seed from W. Drummond and Sons in Dawson Street in Dublin and then set off for a six weeks journey across rural Ireland. They chose Swedes seed, white Belgium carrots, mangel-wurzel, cabbage, parsnip and flax.

Most of the seed was distributed in Mayo and Donegal. Also, he granted some money to local craft industries that had been set up to provide employment.

He travelled to Ballina and saw the widespread devastation caused by the Famine.

Back to England he wrote and published the book “Six Weeks in Ireland” documenting what he saw and about the situation in Mayo too.

”It was melancholy in the extreme to see the women and girls labouring in mixed gangs on the public roads. They were employed not only in digging with the spade and the pick but in carrying loads of earth and turf on their backs, and wheeling barrows like men, and breaking stones; while the poor neglected children were crouched in groups, around the bits of lighted turf in the various sheltered corners along the line.”

In 1848 members of the Society of Friends were aware that the Government did nothing to improve the long term prospects of the country and was only focused on non-productive tasks.

Following the seed distribution, they decided to take action and to reclaim some land to improve their operation.

Some landowners near Ballina offered the central relief committee free use of land for a season. The offer was accepted and 360 hectares were chosen for the scheme. Around a thousand people were hired to prepare the soil for crops. Their wages were higher than normal.

The cost of the project included the salary and expenses for purchasing imported fertiliser and seed. The main crop chosen was the turnip, but the flax was also introduced. Unfortunately, this spade-cultivation experiment failed mainly due to the previous poor condition of the land.

Despite the failure, the Quakers achieved the two main goals: provide employment and teach small-holders to grow alternative varieties of crops. As a result of this project, some flax mills were set up near Ballina.

Also, The Society of Friends decided to be involved in some fishing communities encouraging new fisheries.

Unfortunately, they were not successful basically because of the distance from markets and the lack of bait due to the destruction of shellfish beds made by the starving population who gathered seaweed.

Fishery projects at Achill did not last long. The project at Belmullet lasted two years starting from the end of 1847, and some fifteen fishing boats and ten curraghs were equipped; unfortunately, the proprietor ran the business poorly and the project failed.

The selfless way in which these Quakers gave their time, energies and even their health made its impact on the Irish psyche and to this day the famine relief efforts of the Society of Friends have not been forgotten in folk memory.