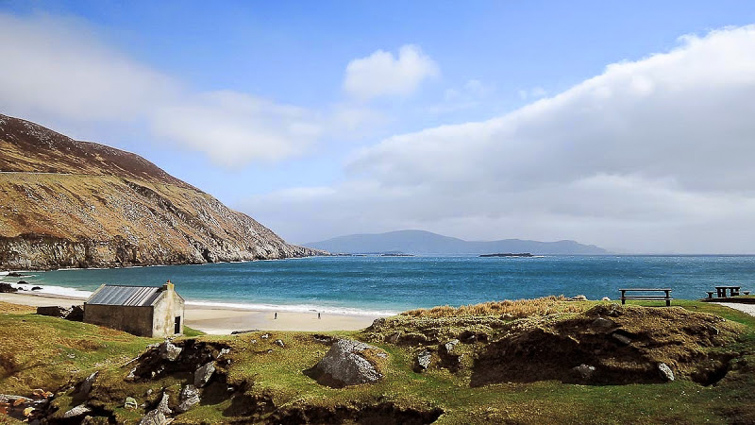 Keem Bay is one of the most popular and beautiful tourist destinations in Mayo. In the recent past, a basking shark fishery was located here and in Purteen Harbour.

Basking sharks were attracted by the warm waters of Clew Bay influenced by the nearby Gulf Stream, and local fishermen used to harpoon and net them.

Sharks were caught for their liver oil at first and then, when the prices for the oil declined, for their large characteristic fins and flesh which were also utilised in the Asian shark fin soup and ornamental markets.

Achill’s basking shark fishery was the best-recorded fishery in the world.

The story of this industrial-scale fishing of basking sharks inspired the documentary filmmaker Hugh Falkus to make a low-budget film about it: “Shark Island”.

This “docu-drama” is in connection with one of the most tragic drowning offshore Achill Island.

In 1932 Dr. O’Donnel-Browne caught by rod-and-line the largest porbeagle ( a species of mackerel shark) ever caught in Irish Waters just off Keem Bay. It weighed 165 kg, its head can be seen over the bar in the Achill Head Hotel.