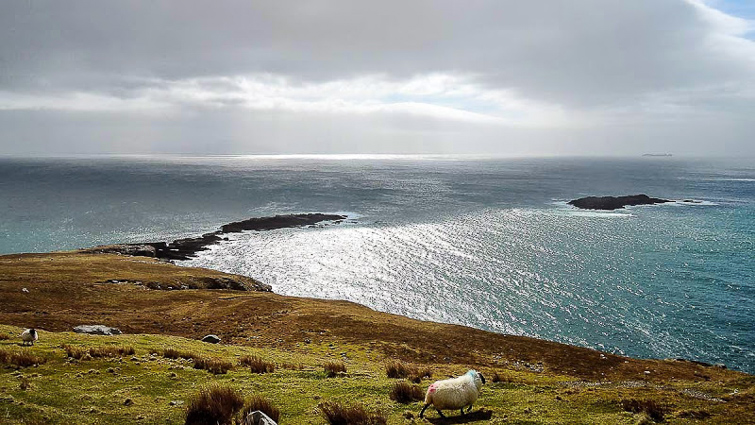 In 1951 Hugh Falkus, an English actor, playwright, broadcaster, fisherman, pilot in World War II and film producer, heard a BBC radio programme about the industrial-scale fishing of basking sharks on Achill Island and the audacious technique used by the fishermen to catch them.

The speaker was the Donegal born man Charles Osborne, who, after fighting during World War II, settled on Achill Island in the little village of Pollagh to lead the life of a fisherman.

Falkus was fascinated by Osborne’s words and decided to make a low-budget film with a small cast and crew telling the story of the basking shark factory on the island.

He hired Sam Lee to direct and Bill Brendan as cameraman. Charles Osborne was the film’s art director and also played a local fisherman showing the ropes to his English cousin who was played by producer Hugh Falkus himself.

Osborne’s wife played a woman loading a donkey with sea weed, while his youngest son appeared briefly skipping along the road. The young 21-year-old actress Claire Mullen was the only other person involved in the film; she played the Osbourne character’s sister Kathleen.

Hugh Falkus’s wife of four weeks, Diana Vaughan, was in charge of continuity.

Most of the fishing scenes were filmed from Charles Osborne’s boat “Pride of Cratlagh” which locals said to have been a hen house before Osborne had repaired it.

The members of the cast were asked to do quite dangerous things including climbing steep, rocky cliffs and going out in the treacherous seas in the small currach.

On 11th May the crew couldn’t film all the planned scenes around the dangerous Daisy (Dysahgy) Rock because the camera got wet shooting on rough seas.

The following day, being the camera dried out, the crew and cast left for the Daisies to film the sequences missed the day before. There was a thick fog over the island and sea. Only Clare Mullen stayed ashore trying to get some calamine lotion for her windburn.

While the crew was filming around the Daisies, a massive eight metres in height freak wave struck and capsized the boat sinking it.

After the boat sank all members of the crew was still alive. Falkus swam around and gathered up pieces of the wreck to build a raft for the survivors to clutch at.

Then he swam back ashore to get help swimming in the freezing water with a temperature of ten degrees Celsius. A Scottish fishing boat off Keem Bay rescued him and raised the alarm.

No survivors were found. The bodies of Sam Lee and Diana Falkus were found floating near where The Pride of Cratlagh sank, while, tragically, the bodies of Charles Osborne and Bill Brendon were never found.

Hugh Falkus stayed on the island during the police’s investigations.

A few days later, he decided to complete the film and give the small proceeds to the dependences of the victims.