Many young men of Twenty said good-bye, well, yes they did, but not Tom, he stayed and fought the good fight all his life. Tom Durkin's life is similar to many young men of his generation, who stayed at home and started life as young shop-boys in their local town.

He was born in Ballincurry, Curry, Co. Sligo in 1903. He was one of twelve children born to Jeremiah and Anne Durkin. Anne's maiden name was Coffey, and she hailed from Powelsboro, Co. Sligo. Tom started his working life as a shop-boy in McDonnell's Hardware Store, Main St. Charlestown in 1917, aged fourteen years. His father had to pay Michael McDonnell £50.00 per year for the privilege. He learned all there was to learn about the business and while there worked with Martin Dunne, who later on, also opened his own shop in Barrack St. Martin Dunne was the father of Patsy Dunne MCC, and Mary Dunne.

His political aspirations then took over, and in 1921 he joined the East Mayo Brigade of the IRA. He stayed with the IRA until 1923, and then returned to work in McDonnell's. An historic photograph of the East Mayo Brigade accompanies this biography. It was taken outside Swinford Church in 1958, after Mass for deceased members. Tom Durkin is 5th from left in the front row. 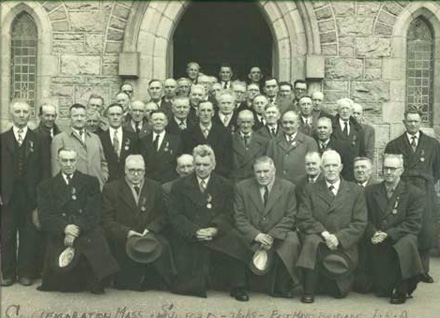 Shortly afterwards he left McDonnell's to work for Pat Seary, Hardware Store, Tubbercurry, Co Sligo. Michael McDonnell thought a lot of Tom, and wrote him a letter, requesting his return to the Charlestown Store as foreman. Tom duly returned as foreman and performed his duties with Michael McDonnell until 1929. It was then that he took one of the most daring decisions of his life.

He rented the premises in Main St, then known as the Railway Bar, from Luke O'Donnell. The premises had previously been rented by Tom Dooney, a well known Merchant at that time. There was a lot of business in that locality, because of the close proximity of the Railway Station. There were three trains per day, to and from Sligo. He had to start work at 7am, to be ready to serve the passengers catching the train to Cobh in Cork, and then they boarded a ship for their long journey to New York, some never to return. Sunday night was also very busy, because of the dances in Walshe's Central Ballroom, just beside him. His brother Charles helped him with the work on many an occasion.

Then in 1944, he made another gigantic step in his business life.

Before 1944 dawned, many important events happened in Tom's life. He worked long hours in the Railway Bar and made many friends during that time.

One such event occurred in 1926. In that year, a lovely young girl, from Craughwell, Co. Galway, took up a position as Bookeeper in the long established business of JW Mulligan, Bar, Grocery and Hardware Merchants, the Square Charlestown. She was Bridget Spellman, and what an eventful time it was to become for her. Naturally, it did not take Tom long to spot her and as the saying goes, they started doing a line. That line ended in 1932, when they got married.

Their early life was full of happiness, and were blessed with the birth of six children, four girls and two boys:

Maura, now retired in Pine Grove, Charlestown, and having given many loyal years to the family business in the Square

Pauline Gorman, and is now a retired District nurse in Castleblaney, Co. Monaghan

Jerry, also a retired businessman, having managed the operation in the Square, until it was sold

Last but not least, Joe, now a successful Dentist in Ballina.

Tom and Bridget reared their children well and encouraged them along the way in their chosen careers.

It was a blessing that Bridget took up her position in J.W. Mulligans, in 1926. Her experience and knowledge of that business, probably encouraged Tom to purchase Mulligan's in 1944. The purchase price was £5000.00. What a brave decision it was for both of them. To save that kind of money in those days was nothing short of heroic, and they deserved their courage and enterprise. The premises was purchased from Dr Francis Mulligan, then a Doctor in Mullingar. The two businesses were run concurrently until 1952, when they left the Railway bar and moved, "lock, stock and barrel", to the Square. Many of the customers that they served in Main St. moved with them to the Square. The Sligo and Mayo people stayed loyal to Tom during his long career in Charlestown.

Tom was not finished yet and his Political career was about to commence. Before I move on to Tom's Political career, I would like to list some of the loyal employees, that worked for him over the years.

The first Fianna Fail cumann to be established in Charlestown, was set up by Tom, and the following people, for the year 1926-1927. They were: PJ Honan, Jack Peyton, Tiny Duffy, Mike Dillon, Pake Finn and Pake Kelly. The following people listed, attended the Mass held in Swinford Church on the 7th of April 1958, for the present and deceased members of the East Mayo Brigade, Old IRA.

Capt Thomas Egan was from Lavey, Charlestown, and his son Sean, died recently in Dublin. Eamonn Regan was from Kilmovee, and was married to Olive Gallagher, Charlestown. Tommy Tarpey, was from Clooncoose, near Charlestown, and was an outgoing Councillor. Looking back to that election now, it seems that Capt Egan and Tommy spoiled one another, but that is all history now, and Tom went on to represent the Charlestown area until 1974, when he retired.

During his political years, Tom had many loyal customers, many of whom attended the meetings in his Bar, which was fondly called: Tom Jerry's, or the Ideal Bar.

Mayo County Council Members and Officials pictured at the Courthouse - 1956 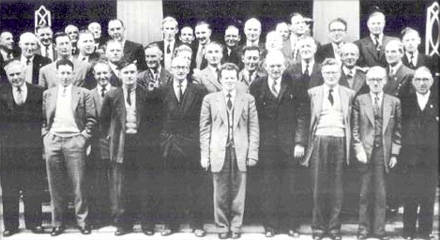 I could not complete this Biography, without mentioning the rapid decline in the population of the Swinford area, during this period. As already stated, the Electorate in 1955 was: 12689 voters on the Register. By 1967, it had dropped to 9577, a drop of a staggering 3112 voters. It must have been very tough for the businesses in the area then. Thankfully it is a lot better now.

The family business, which consisted mostly of: heavy and light hardware, including all building materials, Timber, Iron, Cement, Furniture, Bedding, Wallpaper, and Fertilizers. The Bar and Grocery also thrived, anything was sold that could be sold, from a needle to an anchor. Deliveries were also very much part of the business, and they were made to all of Charlestown, and Swinford areas, as well as Curry, Tubercurry, Aclare, Tourlestrane, Banada and Kilmovee.

Time moved on, Tom passed away in June 1982, and his loving wife Bridget died in 1993. Jerry's loving wife Mary, nee Carney, died in 2000. Jerry ceased trading in May 1998, and sold the property. He is now happily retired and living in Pine Grove.

Tom Durkin was very much a man of his generation. His quick intelligence, gave him a definite grasp of what he should achieve in life. He did just that, from the first day he left Ballincurry, to his last day in the Square, of his beloved Charlestown. He understood his role in commerce, family life and politics. He walked into the life he had chosen with dignity, and he left that life, never having spoiled his achievements.

I wish to thank Jerry, for his very valuable help.