The most characteristic landscape

In County Mayo there is the largest land area of peatland in the country (212,000 hectares).

Peatland is a wetland terrain dominated by living peat-forming plants. Fens and bogs are both types of peatlands; the bogs are situated higher than the surrounding lanodscapes and get their water from rainfall while fens are located on slopes, flats, or depressions and their water comes from rainfall and surface water.

Bogs have an acidic nature while fens are generally more nutrient-rich because they have a higher pH, but both support a wealth of wildlife.

In the bog's habitat several birds of conservation importance have been recorded such as: Greenland white-fronted geese, golden plover, dunlin, curlew, merlin and red grouse.

Butterflies such as the very rare marsh fritillary and species of moths can be also found on Mayo's bog.

Bogs also have an unusual flora due to the acidic soil and wet conditions.

The rare bog orchid has been recorded at one site in the country.

Bogs are the most important source of peat, which in Ireland also called turf. People use the turf as fuel. The turf is traditionally cut with a narrow spade and laid out to dry on the ground.
When the turf dries off, it is stacked into clamps; the cut sliced into the bog and the stacks of turf make up a very distinctive landscape, while the light and the smell of turf fires glowing in the living-room inside a cottage or a pub give holidaymakers a warm unforgettable glow. 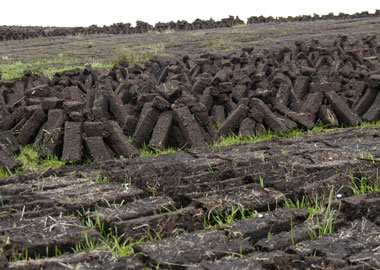 Some of the best examples of bogs (blanket bog and western raised bog) are found in Mayo. Prime upland sites include the Nephin Beg range, Mweelrea and the Sheefry Hills.

Lowland peatland dominates much of the north and north-west of the country and includes some important sites such as Mayo National Park at Ballycroy.

Fens have a mosaic of different habitats from open-water to reed-beds, small sedge vegetation, to semi-terrestrial birch and alder woodland and this contributes to the rich diversity of plants and animals. Mayo contains a few fens, mainly in the east of the country.